We couldn't be happier with our new combi bolier

My husband and I really love our Eco-King combi boiler and couldn't be happier with it:) We are now considering to have Eco-King's 15,000 BTU high efficiency heater installed!
read more

I've been using the Eco-King C100 combi boiler for a couple of years now. It has been a very reliable source of heat and hot water for me. I live in a very small house and do not have room for a water softener so my initial concern was how to prevent mineralization that could build up inside my boiler. I opted for an electronic device that has a current going through two wires wrapped around the water line that goes into the boiler and is supposed to magically align molecules thus preventing mineralization inside the boiler. So far so good. I like the videos that are made on YouTube with Chad, he is very thorough and explains things well.
read more

We have had our Echo King furnaces and hot water tank in our duplex for 5 years now. We have saved so much money on our natural gas bill! There is a very noticeable improvement from our old and very inefficient furnaces. Our home is warmed quickly when we turn on our furnace.

Maintenance is a dream. We have had no problems at all since they were installed. So far we are thrilled with our Echo King products! 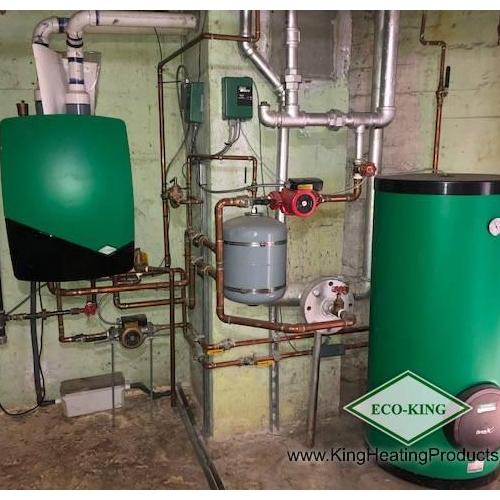 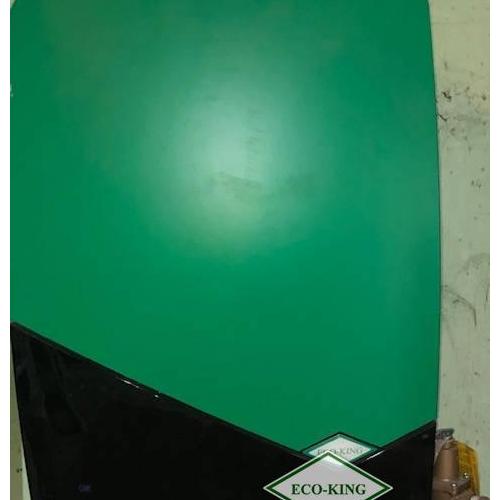 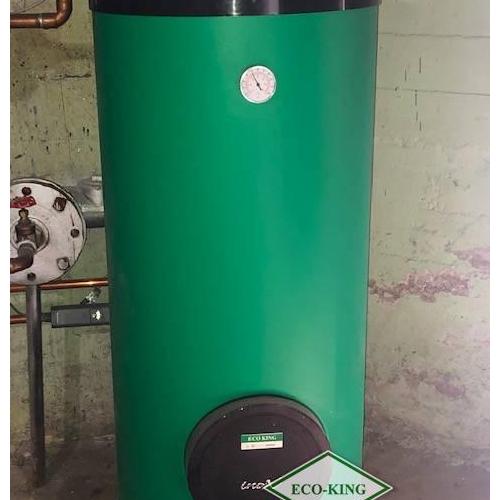 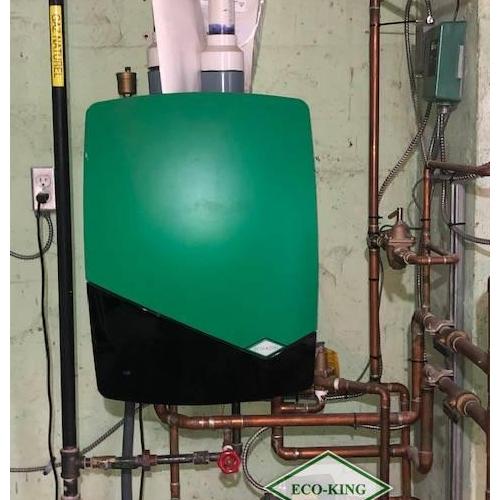 Thank You for Your Great Support

Review for Boiler Installation and Setup Eco-King team, just wanted to quickly thank you for assisting our installer Travis with the Eco-Ling boiler installation and setup tonight. Your support is greatly appreciated. It's always nice to win and get a customer back up and running on time, on schedule and on budget!

Best units on the market and made in Canada

I have an Eco-King boiler in my shop for the in-floor hydronic heating and another combi unit in my house for hot water and hydronic heat. Installation was a breeze with all its built in features. Best units on the market and made in Canada, how can you beat that.
read more

A few years ago we purchased a grand, 107 year old, 5,600 sq foot home in downtown Kelowna which we decided to utilize as a Bed & Breakfast. Our inherited heating system was a noisy, 25+ year old gas boiler and a large array of cast iron radiators that were at least that old, plus a more recent yet still dated large, electric water heater. While our cast iron radiators worked well, and we were getting the heat we needed, we grew concerned that our old boiler was nearing the end of it’s useful life. We couldn’t afford to be cold - not with rooms full of guests. We also weren’t sure how long our hot water tank would last, so our concerns were two fold.

We began our search for a reputable installer as we knew nothing about the available product options out there. We called pretty much everyone in town. Several companies came in - looked over our old system - and refused to quote, stating it was too complex. A couple did quote, but their prices were outrageous, and in the end we felt we were being fleeced. The search grew rather frustrating until we finally heard about and contacted John de Man from De Man on Demand Plumbing. John immediately impressed us with his honest, professional manner - his prompt and courteous contact with us - and the fact that if he said he would call or show up - he did; and when expected. John reviewed our current systems in detail, admitted it was going to be a tough nut to crack, but he did a detailed evaluation, did his research, and presented us with solution options. In the end we chose to go with the Eco-King C200. This option allowed us to replace not only our out-dated, low efficiency gas boiler with a state of the art system, but just as importantly, we were also concerned about the longevity of our electric hot water system, and the size of our electric bills. We knew gas was a much cheaper option, and we felt the Eco-King C200, high efficiency boiler was the right answer for us. John told us how long it would take to install, we set aside time in our booking schedule, he got started and worked tirelessly to meet the timeline he provided to us. We had customers due in and we simply had to have heat and hot water. We did not want to risk loosing bookings, but even far more importantly, our reputation.

John really delivered. We couldn’t believe the power of the system, the small footprint - our old boiler and hot water tank took up a great deal of space - and it was so cleverly installed on the wall - out of the way. Admittedly, I’m a certified 3rd Class Power Engineer. Running large, commercial boilers is what I do, and I must say I was impressed with all the professional grade features of the Eco-King system. Frankly, it made me wish I had some of those features on my boilers at work! But to be honest, when John walked me through the system, explaining what each thing does and how I can make adjustments to the settings - I felt it was extremely use friendly. The systems I run are vastly different, but I was able to easily grasp the menus and quickly learn how to change the options.

If that was the end of our experience with John and Eco-King, we would have been impressed enough. But there is some truth in the fact that you never really know what level of service you are going to get, until you need it. As our house was old, and our cast iron radiators and the sheer volume of water in our piping is daunting, we knew that this state of the art system was going to need tweaking. John said as much, upfront. We had some challenges, the system needed some tuning, and true to his word John was there - every time. We’d call, he’d answer and either walk us through the adjustment or show up on a timely basis and perform the fix himself. John even offered, and we accepted, to drop in and check on our system when we were away; just to make sure all was as it should be.

At one point we seemed to have a recurring noise/vibration that was coming from the boiler. John tried several changes and configurations but we just couldn’t solve it. As John has an excellent relationship with the manufacturer of the Eco-King product line - Chad Euverman - he called Chad directly and discussed the challenges. As luck would have it Chad would be in town in the next few weeks and Chad set aside time from his schedule to visit our home and personally analyze our installation. That level of commitment to a product is rarely seen these days. We can attest first hand that Chad and Eco-King absolutely stand behind their products. We also learned after testing that our system was performing at a 97.5% efficiently level. That is simply outstanding.

In short order John and Chad were able to narrow down the probable cause, began to make adjustments and it was only after a few more visits from John that the cause revealed itself. It was a part that was just “failing” enough to give symptoms but not show itself to be the obvious issue. Finally, the part itself failed and John promptly arrived, diagnosed and replaced the part from his full repair kit within less than an hour. Today our system is purring, and working extremely efficiently. By replacing our electric hot water tank and inefficient natural gas boiler we have seen dramatic savings in our energy costs. Now not only do we have a state of the art system, but we enjoy peace of mind, considerable energy cost savings … and the $1,500 Fortis rebate on it’s way is a very nice little bonus earned by replacing our heating and hot water systems with the high efficiency Eco-King C200.

We can’t say enough good things about John de Man, and his recommended solution to our problems, the Eco-King C200. Thanks John!!!

I will be installing more Eco-King boilers in the future As a professional heating and cooling specialist in Revelstoke, BC, we've recently tried Eco-King product for the first time. Upon first opening the box I had a lot of questions, but after installation I am very happy. This unit has turned out very well and as long as the system has a reliable life, I will consider this a major success. I am definitely considering switching to more Eco-King boilers for our installs in the future.

We were desperate. Our Eco King Boiler stopped providing us hot water and heat just before Thanksgiving weekend. A service tech from a company, who I will not mention, worked with Eco King on the phone and it was determined that the circuit board needed to be replaced. Waited three days for the part. The same tech spent three hours to install the new board, clean two Eco King boiler and try to get the broken boiler started. No success, but still had to pay $1K.

We were desperate. Called King Heating Products since they manufacture Eco King boilers on a Saturday morning. Voice mail greeting was the President of the company. I thought this was pretty cool. Left a message not expecting a call back until Monday if I was lucky. Nope, Chad Euverman the President himself called back that Saturday morning and walked me through on the phone to fire up my boiler. He was patient and very clear with his instructions over the phone. It was a matter of switching a component from the old circuit board to the new one. If it was not for Chad's help I would have paid more tech hours and from that tech's recommendation switch the gas regulator. I was very impressed with Chad. He helped overt going down a needless and costly path for us. Thanks Chad. My wife and I look forward to thanking you in person.
read more

We've replaced our old furnace and hot water tank with an Eco-King, fan coil and Eco-King indirect tank. It works perfect and it is a very nice system. We are happy with our upgrade choices. It required bit of a learning curve to get to know this high-tech computerized unit, but the money we would be saving on energy costs alone makes Eco-King products winner among competition, in my opinion.
read more

Do yourselves a favor, upgrade your boiler and electric baseboard heaters to Eco-King units and start saving in heating costs, plus get FortisBC rebate

The Eco-King C140 combi boiler also eliminated the need for a hot water storage tank that wasted energy on stored hot water. The combi bolier unit now provides us with tankless on demand hot water and heats our house at an affordable rate. We also saved good amount with a FortisBC rebate for upgrading to an Eco-King 94% AFUE efficient combi boiler! 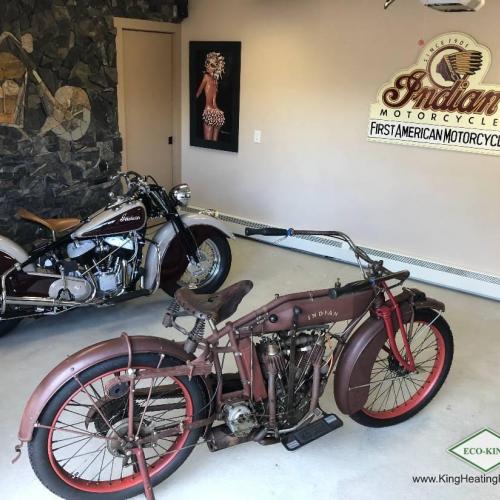